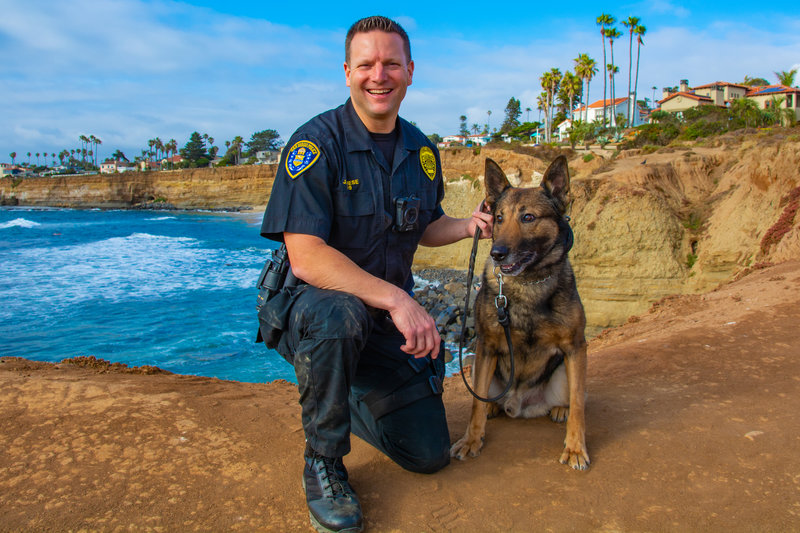 He said he heard the first call go out of a suicidal man with twin two-year-old girls driving with the intention of careening off the Coronado Bridge.

Law enforcement tracked his phone to Sunset Cliffs where a SDPD lieutenant watched him drive off the cliff at a high rate of speed.

SDPD K9 Officer Jonathan Wiese said the man had his daughters in his lap during the crash and the truck landed upside down on top of a rock, which would have killed the girls had they been in the back seat.

Wiese said his goal once he saw the truck was to get down to the family and get them all to safety.

"I could see him and he had one of the girls in his arms, and I have a two-year-old daughter at home so I imagined, what if that was my wife and kid down there? You're not going to stand there on the cliff and watch it happen," he said.

Wiese said his heart was pounding as he thought of a way to get down the cliff-side. Then he remembered he had a 100 ft leash for SWAT missions.

He grabbed it, took off his gun belt and looped it around his waist, "and by then four or five other cops had shown up so I pretty much threw the end of the leash to them and then I said hang on and I just jumped off."

He said with teamwork, they lowered him down to the rocks below, where he slid his way into the water and swam, fully clothed to the father. By that time, he had both toddlers in his arms.

Wiese's next goal was to get them out of the water.

He said the truck acted as a break from the surf while he gathered his thoughts, and a memory hit from his time in the Marine Corps. "They taught you how to do water safety rescues and I had a little flashback of okay grab him under the armpit and push him so I swam and held them above water," bringing them to shore.

He noticed one of the girls was alert while the other was limp. He said he did some 'rescue breathing' while officers above got him a backpack with supplies.

They used the backpack and leash to hoist both girls up to a waiting ambulance.

Wiese said while he sat with the father, waiting for a helicopter to come hoist him up, the man said "he was going to die and the girls were coming with him."

"That's probably the most heroic thing I've seen in my 32 years," he said.

He reminded us Wiese is the Officer of the Year, honored for a long list of heroic acts, including helping arrest the suspected Chabad of Poway shooter.

This all happening as police fall under the nation's microscope.

"I didn't do the job to be liked every day, I didn't do it to become rich, I did it because I want to be out there making a difference and helping people, as cliche as that might sound, but I was just glad I could be there," Wiese said referring to protecting those toddlers.

During the rescue he said he was focused, but it does take an emotional toll, "you just do what you have to do, but after everyone was safe, it hits you and you just want to go home and hug your kids that's for sure."

Nisleit said the girls were in the ICU, but are expected to make a full recovery.